← more from
Hydra Head Records
Get fresh music recommendations delivered to your inbox every Friday. 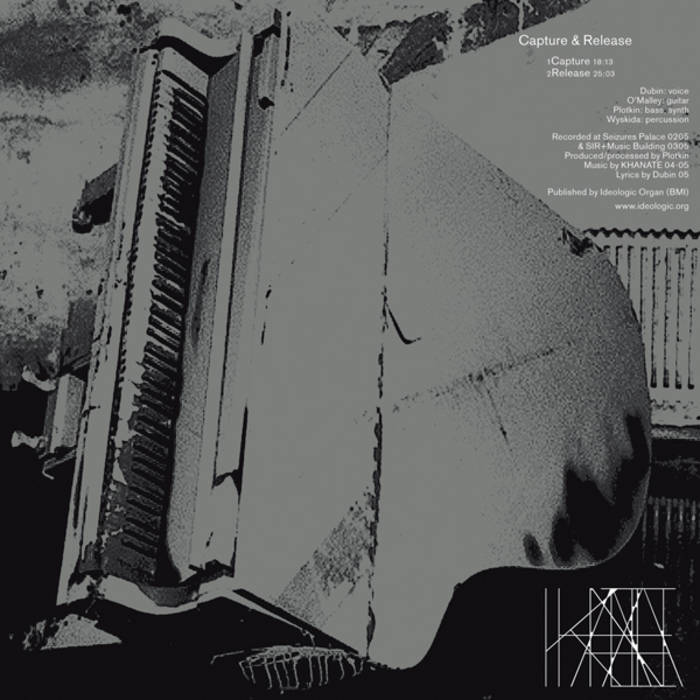 The NYC quartet's third and best full-length, Capture & Release, generally picks up where others left off, but in an extended, grimier fashion, pairing the 18-minute "Capture" with the 25-minute "Release". It's like a doom-metal opera; the Melvins possessed by Die Kreuzen.
Capture & Release's most immediate hook is Alan Dubin's bewitched growl. On stage, the vocalist crouches and grips his microphone like a weapon (arms extended), face hidden behind his long hair. On record, filtered through headphones, he pounces and gnarls with taunts and warnings and disses-- "You are blood/ Nothing more," etc.
Dubin's backed by the guitar of Stephen O'Malley (Sunn 0))), Lotus Eaters), the bass and synthesized laptop effects (wind, gurgles) of James Plotkin (ex-Atomsmasher), and the heavily glacial Codeine drums of Tim Wyskida, who whacks toms as though willing arms to unhinge. The conductor, Wyskida's cymbal crashes function as dissolves into Dubin's next monologue; on stage, all the players watch him, and when they land at the same time, the room literally shakes.
Because Dubin chants his libretto with vocal effects, it can be easy to misunderstand him. He opens "Capture" by shouting "Who says I can't have?," but for a long time, I swore he was nodding to AC/DC and screaming "Hell's Bells." Which is better? Getting the lyrics right adds to the experience, but Dubin's scowl is so ominous you don't need to grasp each syllable to generate chills. The main storyline seems to be luring someone into a basement, strapping and tying them to something, and repeatedly letting them know that "this is my house" and they're "one step closer to nowhere." Moments where the drums pickup a bit (well, it's the speed of a log-jam) and the bass/guitar/vocals/and atmospheres collide in mid air that'll make just about anyone commence half-speed headbanging.
"Release" opens with three minutes of dank dungeon atmospherics during which Dubin whispers, "I've got a bone to pick/ Maybe it's yours." Here death is the sole escape, so when Dubin continues "I won't let go" over cymbal sheer and clean guitar strums, he's promising an eternity of torture. For the final movement of the album, hell breaks loose: More guitar distortion, incrementally faster drums, choirs of feedback, chomping synth noise. Live, this is when Dubin pumps his fist in the air and the audience pisses their pants.
A few nights ago I tried explaining Khanate to a friend, who said she didn't really get "experimental metal" or the way certain bands test their audience. I disagreed with the idea that Khanate (or other bands) are testing. Dubin and company aren't aiming for easiness, but they offer patient listeners the chance to burrow into a seductive cocoon, into a sound as chilling and ominous as a pool of black icebergs. After a healthy brainstorm-- the Cure and Current 93's ouevres included-- I can't think of a three-minute pop song offering a similiar effect.
- Brandon Stosuy / Pitchfork

Bandcamp Daily  your guide to the world of Bandcamp